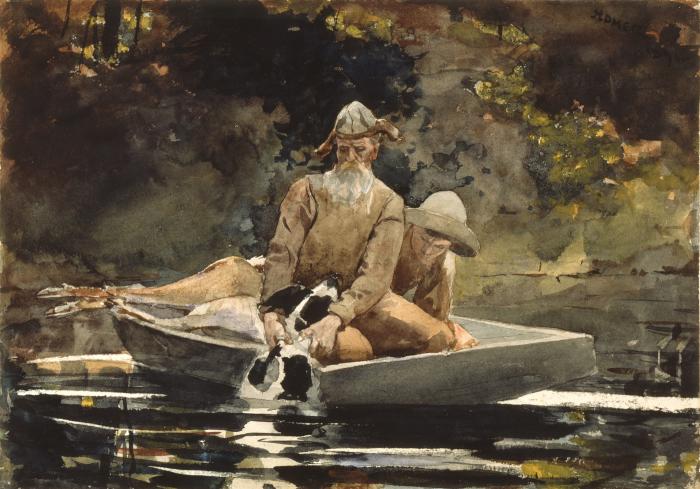 The medium for this piece is graphite, watercolor, and gouache. I'm including it because I'm fairly confident the first step in creating this was a solid drawing in graphite pencil. This illustrates how solid drawing serves as the foundation for other media and sets the stage for creating a piece of art that can resonate emotionally across time.

If you follow the link, there is a longer write-up on the background of this particular piece. However, it is worth noting some of the technical aspects that make this piece shine. If you squint your eyes at this image, you'll notice that everything in the background blurs together and recedes. Homer wisely chose to have everything behind the main figures be much darker and blur together. While the sharpest, lightest, and highest contrast items remain in the front and foreground.

While data states this piece was created in 1892, this piece speaks to me personally, today. Most obviously because I adopted a dog this year, so the depiction of an emotional moment between a man and his dog resonates with me. Being a dog owner, what resonates is exactly how happy the dog in this image probably was.

It may seem like the man is holding or pulling the dog into the canoe, but on examination, I believe the main figure is actually showing affection and congratulating the dog. (He may still be trying to pull the dog into the canoe, and Homer may have tried to depict that, but I still think pulling the dog in from that position would have toppled the canoe. ) From what I know of dogs, I don't know if you could show a dog a better time than to take it along into the wilderness, on a hunt, and give it a job that it can do. To me, the image implies the dog has probably spent the day running around and has swum back to the owners and the owner is congratulating it for returning and showing deep affection.

The best way to learn from these drawings is to do a copy.

Click here for my tutorial on how to do a master copy drawing.